New York Times Bestselling Author Ann Leary takes you on a tour de force in this remarkable tale of old-money, family secrets, the time-neglect of mansion estates set against the quaint background of the northwestern region of Connecticut. This was my first foray into Leary’s literary works, a one of a kind, bestselling author who sweeps you into a storybook tale with real-life complexity that leaves you satisfied. Author Ann Leary, The Children, brings the reader into this world. 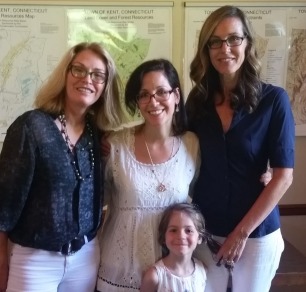 I had the privilege of meeting her in person on July 23 at Kent Town Hall, hosted by Kent Memorial Library, and introduced by New York Times bestselling author Marcia DeSanctis, 100 Places in France Every Woman Should Go.  Ann Leary spoke frankly about her novel, revealing the behind-the scenes daily grind involved in the writing process. Ms. Leary was welcoming and gracious, and it was an honor to be in the presence of a great literary talent so widely recognized in the publishing world.

I read through it in little time.  It’s a compelling read that draws you in…easily.  Leary is entertaining in her story telling.  The story is quick-paced, well written, and the characters are believable, thriving with their own peculiar traits.  Each individually crafted to human likeness.  Told from the first person narration of the imperfect, yet all too likable Charlotte (Lottie) Maynard, The Children is a blend of two families, the Maynards and the Whitmans, who seem to merge seamlessly at the onset, at least when viewed in hindsight from Charlotte’s perspective, but whose “truth will rise above falsehood as oil above water” as once quoted by Miguel de Cervantes. Don’t let the easy-going writing style with frank, clear cut, vivid depiction fool you.  What you see isn’t always what you get in this real ‘to life’ tale, and its timely deliverance of truths will leave you surprised at every turn, with a stunning conclusion that rips the rug our from under you.

When wealthy Richard (Whit) Whitman, while still married to Marissa, falls in love with Joan Maynard, he takes command of his destiny and leaves his wife for her, thus abandoning his job (former father in law’s firm in New York) and moving to northwest Connecticut to start life anew at Lakewood Cottage, a family dwelling estate from a long line of Whitmans that made their wealth from “steel money”.   Joan brings her two daughters (Charlotte and Sally) with her.  Add to this a partial blend of Whit’s two sons (Perry and Spin) from his previous marriage.  The two boys visited their father on weekends where he resided with his new family at the Connecticut home. It was noted that Whit, surprisingly thrifty, would forget to open the heating ducts for the boys’ rooms until after they’d arrived on their visit to their father’s Connecticut home.  The cold bedrooms, and a “chilliness that developed between Whit and his sons” gives you some idea of where the animosity starts to brew. Perry is not shy about letting his resentment be known. Something which he naturally took in from his mother, Marissa.  Spin, beloved by the sisters, is quite different and more agreeable.  Never complained. Never seemed to have an issue.  Or so it seems.

Fast forward to the future, with all children now grown.  Lakewood Cottage has become a run-down estate never properly maintained due to Whit’s frugality. As the book opens, we are introduced to Whit as spoken of through Charlotte’s memory.  Whit has since passed, his sons have inherited the family estate, with orders that Joan be allowed to live there until her own passing.  Spin, the favored brother, modest and naturally kind and loving towards his step sisters, brings home his new fiancée Laurel Atwood.  By all appearances, the woman is beautiful, accomplished by such a young age, almost enviably so, but to whom Charlotte easily warms to.  She seems to bring ‘life’ into the household, is affable and easy to be around.  Lottie’s sister Sally, on the other hand, a talented musician fragile from her own physiological ailments, doesn’t warm easily to Laurel.  And petty as her warnings appear, seems to see something no else can. But her warnings go unheeded due to her lack of credibility. Lottie, herself is a “mommy blogger”, pretending to be a suburban housewife, even though she has no children of her own, yet has a strong Internet following of women who believe her to be. It’s each man (or woman) to his/her own confidential.

Spin, previously open-hearted to his step sisters, now is influenced by Laurel, but she may have designs.  He will soon show a bitter indignation.  Has he felt this way all along?  Did Laurel bring this to surface, or did she create a catalyst that let it come on its own?

Laurel may not be who she portrays herself to be. But her presence tests the frailty of their relationship.  Something of which could either strengthen or tear them apart.  Everyone in the household has a secret of their own.  Everett, the groundskeeper, is close to the children like a brother, bonded to them by having lived through the ugliness of their shared past.  With Whit gone and a new generation coming up, the children of this blended family, the off-spring of both old and new money, will be tested to the limits.